I had one of those awkward parenting moments the other day when Quinn was acting out with a bad attitude that was quickly spiraling out of control at someone else's house. It was one of those situations where there is no solution that isn't awkward and embarrassing.  I had been patient and sweet and gently redirecting and loving and encouraging and all those other qualities parents in TV commercials seem to possess in infinite amount. But it wasn't working, so I yanked him outside and whipped out my angry voice and lit into him. And it worked. Now, let me be clear, I focused on the behavior, not on shaming him or all those other things you're not supposed to do, but I put the fear of me into this child. He repented, said I'm sorry, and changed his attitude. Five minutes later he was his sweet, helpful self as if nothing had ever happened. I was flabbergasted that after all the gentleness in the world failed to correct his attitude, completely losing my calm worked like a charm.

It is amazing that as a parent of only one child, I have all his one on one interaction with my son and still have no capacity to accurately predict how to talk to my child so that he hears me. Depending on his mood, his social interactions of the last 24 hours, and the weather in China, he can have any one of an infinite number of possible reactions to the same sentence in the same tone of voice. Parenting, it is hard work. Seriously. It's like trying to recreate a DaVinci masterpiece on a canvas that won't stop moving and has a tendency to spontaneously combust.

Although really close to being finished with my read through of the histories and prophets, I've been significantly slowed by February. Not only is this the month of perpetually gloomy weather, I have to walk through the anniversaries of my daughter's birth and death as well as Emmett's diagnosis. Unfortunately, I also have exactly 4 days off this month while putting in quite a few 14+ hour days as well. Add single parenting into that mix, and February can potentially be a recipe for disaster.

But it hasn't been. Quite the contrary, actually. A couple weeks ago, having been woken early full of thoughts and prayers for the day, I found myself driving to work at 6:30 AM having already bee awake for several hours. I was working through a difficult conversation in my head, when it struck me that in a few short hours I had experienced more emotions than most people have in a month. I burst out laughing and started praising God. Despite the numerous difficulties and long hours, my job affords me a front row seat to see God at work in so many people's lives. I see the hard and beautiful and sad and lonely. I see the struggles with mental illness and depression, and I see the victories and encouragements and so many moments that will make my students so amazing. I get to muck through the realness and rawness of life that so many people are missing.

A glorious respite from the gloomy weather came this weekend, happily coinciding with one of my only days off. I was reading though Ezekiel when I cam across this passage from Ezekiel 20: 33-38 (ESV).

The fierceness of God to be king over the hearts and minds of the Israelites, despite their unfaithfulness is both beautiful and terrible in this passage. Seriously. Read it again. Do I really want to call this god, my God? The God who does whatever it takes, however pleasant, to bring his people to a heart of repentance is more than a little terrifying.

Despite the joy from really, finally flourishing in my job after so many year of patiently and faithfully and begrudgingly floundering, I still am convicted of my sin, perhaps now more than ever. Just the other day he brought something to my attention, as if he were saying, "Now, we can do this the easy way or the hard way, you choose." I ran so fast to repentance and prayer that I had to laugh at myself. Now this complicated issue involves how I speak to others, how I respond to their speech when it is not gracious, and how I lead students who are speaking ungraciously, so it is way beyond a simple correction. It involves patterns of my heart and years of attitudes and habits that need changing as well as a huge dose of wisdom beyond anything I can imagine.

But I heard the conviction and I want to repent, and I started to pray about the situation because I don't want God to yank me outside and use his angry voice to lead me to repentance. Because he will if he needs to. I am his and he will allow no sin to remain in me unchallenged. I have heard God's angry voice in my own life as I hear it in this passage, and I am so thankful to have grown into a heart that, although not perfect, is learning to run towards repentance before the angry voice comes out.

Posted by Wendy Stallings at 8:19 AM 2 comments:

I had a college moment this weekend, you know the times where you had so much work to do that you suddenly had an overwhelming desire to clean you room. Yep. That was my weekend. And, wow, my house was clean, and I mean spotless, but only for about twelve whole seconds because I do have an eight-year-old boy.

The cleaning frenzy was a desperate attempt to clear my head. William Zinsser in his book On Writing Well, says, "Clear thinking becomes clear writing: one can't exist without the other." Writing is usually how I clear my head, but I've started a dozen blogs without being able to write more than a few sentences.

I've been suffering the past few months from 3 AM anxiety attacks. I don't usually feel anxious, but for some reason my body has been waking up around 3 AM nearly every morning in a physical state of panic; heart racing, tightness in my chest, out of breath... Often I wake up anxious for a student, and those mornings don't really bother me. I just pray until my alarm goes off. Sometimes though, it's a bit ridiculous. Back in November I had one of these panic attacks because I had noticed Quinn's leopard gecko was looking a little off, and I wasn't sure if he was shedding or dying. I had a panic attack about a leopard gecko. I feel like that's a new low, even for me. The gecko was just shedding and completely fine by the way.

Around the time of the gecko panic attack, someone pointed out that as a teacher I probably have upwards of three to four dozen interactions a day that require some kind of emotional processing. A lab group dynamic I don't like, a difficult conversation that needs to happen, an email I need to write, a student that needs correction, a curriculum quandary - all of these can happen in one day before most people have even had breakfast. And if teaching and coaching a hundred hormonal teenagers isn't providing enough fodder, there's always at least a dozen or so parenting failures to process. It would seem that I already have enough material to wake me up early for the rest of my life.

I was reading through Daniel last week, and in response to the unpleasant vision of chapter 8, he says, "And I, Daniel, was overcome and lay sick for some days. Then I rose and went about the king's business, but I was appalled by the vision and did not understand it."

I sat with that verse for a minute. Then a day. Then a week.

I have a hard time admitting that sometimes the knowledge of God, that his presence in my life is exactly what makes me heartsick. The news of refugees or trafficked women, the heartbreak of a student, my own sin... So much of this world - of my own heart, even - leaves me sick and appalled and awake at unreasonable hours of the morning because I know the one who has the power to fix these things and he has not yet done so. I am appalled by my own capacity for sin. Hearing about the evil in the world makes me physically nauseous. I deeply grieve the pain that my students inflict on each other.  I know that after writing about my anxiety I may be assaulted by a barrage of well meaning people armed with random verses implying that if I really had faith, I wouldn't wake up at 3 AM, but somehow I know they are wrong.

I am deeply grateful that God has not given me the appalling visions like he gave Daniel. Instead he has given me this life, my students, and this world, breaking my heart for each of these things. But he has also called me to get up and go about his business with my sick heart and weak knees and poor understanding. So I go forward without clear understanding, but perhaps with a little more faith. 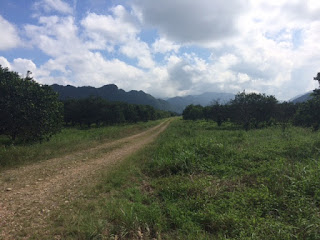 A citrus grove in Belize