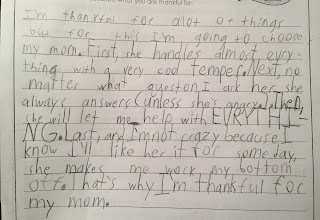 "Mom, this is better than alcohol," were Quinn's exact words to me as he sleepily put down a copy of The Martian that my parents left at my house a few weeks ago.

Um.... You're gong to need to explain that comment, Quinn. Apparently he meant that "alcohol makes you tired and your brain not work well," and this book does that even better. Just as a disclaimer, this little fact about alcohol was not from his vast personal experience, but apparently his brain internalized that particular detail from a recent conversation we had on alcohol and its various uses and abuses.

As Quinn implied above in his Thanksgiving letter, I almost always answer his questions (unless I'm angry, apparently), but clearly I don't always communicate those answers well. It doesn't help that he always asks really hard questions. There was that time when he was four and asked me during breakfast how babies were made. He left that conversation thinking he was pregnant. Then there was the explanation of why we don't use artificial sweeteners, and he told his preschool teacher that he couldn't eat the yogurt because it would kill him. But the most awkward one ever was when he loudly proclaimed to the lady buying lunchables in the grocery store that she was going to get cancer, which was his version of my answer to why I won't buy him lunchables. So it was enlightening to discover what he internalized from our recent conversation on alcohol.

Not being familiar with The Martian, I didn't think much about Quinn reading it until I realized he was half way through it and the pages were filled with cuss words. After willing myself not to overreact, we had what I thought was a great discussion on cussing, why some people do it, and why we do not. I have yet to find out what little nugget he stored away from that conversation, but I'm sure it will be lovely.

Sometimes Quinn will decide that he has better answers than I do, like when he asked me about how to reconcile dinosaurs with the Adam and Eve story. Now, really, I should know better than to start an explanation to an eight year old boy with, "Well, that's an interesting question with a number of viable answers..." This time at least he just cut me off and told me how he thought it happened, which of course made no sense. I have an extensive history of losing arguments to the stubbornness of small children because apparently my explanations are deeply unsatisfying to small children. For example Quinn at the age of three, after hearing my explanation for what caused burping, insisted that pirates in your stomach were a much more reasonable cause of burps and would entertain no other explanations. I have finally learned to just say, "oh that's interesting," and then move on.

I've been reading in Jeremiah this month, and one of the recurring complaints against the people of Judah is not just their rebellion and worship of other Gods, but that they return to God in pretense only. In Jeremiah 3, God even claims that Judah is worse than faithless Israel because they go and play the whore with other gods while simultaneously pretending to have faith in the Lord. The people expect blessing without the cumbersome burdens of repentance, faith, and obedience. They will even offer sacrifices, as long as they aren't too costly.

That is beginning to sound a little too much like my heart. I find myself tempted to distill the beautifully complicated truth of salvation into a generic transactional formula that doesn't require anything so messy as sanctification. Surely heaven forbids I be made uncomfortable or forced to sacrifice my illusions of safety. Surely carrying Jesus's cross was a metaphor for something warm and fuzzy and easy that makes me feel good. Surely that command to do good to the refugee and orphan and poor did not mean I should make myself uncomfortable to do so.

The heart is deceitful above all things,
and desperately sick;
who can understand it?
“I the Lord search the heart
and test the mind,
to give every man according to his ways,
according to the fruit of his deeds.”

Then the word of the Lord came to me:  “Thus says the Lord, the God of Israel: Like these good figs, so I will regard as good the exiles from Judah, whom I have sent away from this place to the land of the Chaldeans. I will set my eyes on them for good, and I will bring them back to this land. I will build them up, and not tear them down; I will plant them, and not pluck them up. I will give them a heart to know that I am the Lord, and they shall be my people and I will be their God, for they shall return to me with their whole heart.

It takes the Lord to give me a new heart capable of knowing him and to returning to him.  I pondered that mystery as I ran yesterday through the neighborhood in which I grew up. Without constant vigilance my brain will slip back into the half-truths and false promises that are comfortable and safe. Living with this new heart, this whole heart, is an answer that I can't quite focus on because my mind won't quite fit around it. It's a question that makes my brain tired and not work very well, so in that sense I guess Quinn would qualify it as "better than alcohol."
Posted by Wendy Stallings at 8:48 AM No comments: